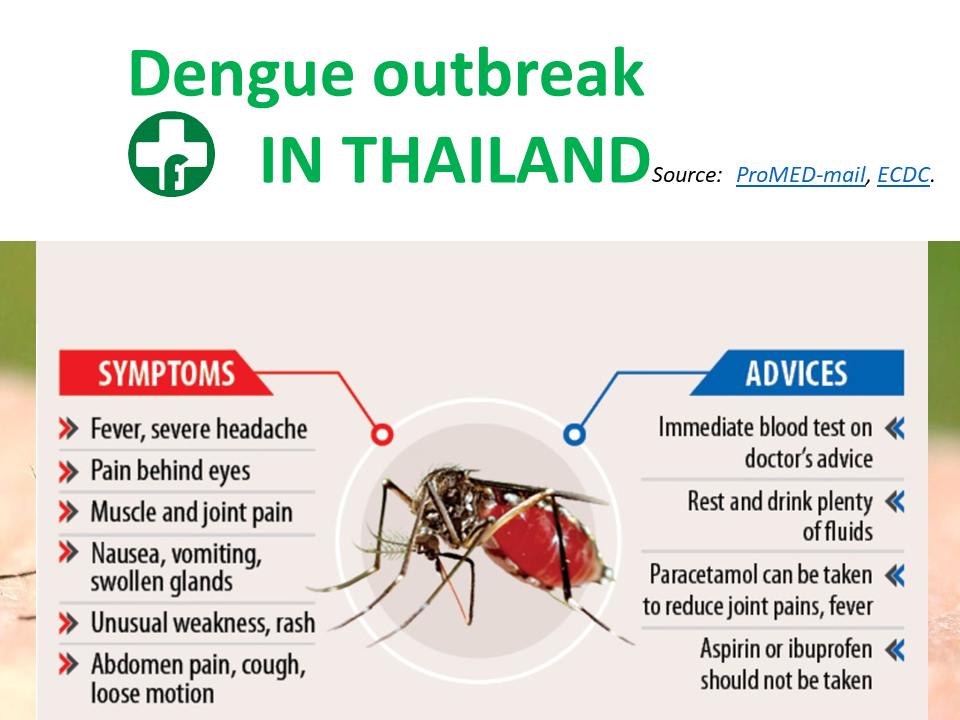 Cases of Dengue have been reported from Thailand. The most affected provinces include Chiang Rai, Chiang Mai, Mae Hong Son, Nakhon Pathom, Phra Nakhon Si Ayutthaya, Phetchabun, Lamphun and Phatthalung. Dengue is endemic in Thailand and risk is present in both urban and rural areas, with elevated risk in northeastern part of the country. Peak transmission typically occurs during the rainy season, from April to December.

Dengue is a viral infection caused by four types of viruses (DENV-1, DENV-2, DENV-3, DENV-4) belonging to the Flaviviridaefamily. The viruses are transmitted through the bite of infected Aedes aegypti and Aedes albopictus female mosquitoes that feed both indoors and outdoors during the daytime (from dawn to dusk). These mosquitoes thrive in areas with standing water, including puddles, water tanks, containers and old tires. Lack of reliable sanitation and regular garbage collection also contribute to the spread of the mosquitoes.

Risk of Dengue exists in tropical and subtropical areas of Central America, South America, Africa, Asia, and Oceania. All travellers are at risk during outbreaks. Long-term travellers and humanitarian workers going to areas where Dengue is endemic are at higher risk. Dengue occurs in urban and suburban settings with higher transmission rates happening during the rainy season.

In some cases, Dengue infection is asymptomatic – persons do not exhibit symptoms. Those with symptoms get ill between 4 to 7 days after the bite. The infection is characterized by flu-like symptoms which include a sudden high fever coming in separate waves, pain behind the eyes, muscle, joint, and bone pain, severe headache, and a skin rash with red spots. Treatment includes supportive care of symptoms. There is no antiviral treatment available.

The illness may progress to Dengue Hemorrhagic Fever (DHF). Symptoms include severe abdominal pain, vomiting, diarrhea, convulsions, bruising, and uncontrolled bleeding. High fever can last from 2 to 7 days. Complications can lead to circulatory system failure and shock, and can be fatal (also known as Dengue Shock Syndrome).

If you are infected with the same Dengue virus serotype you become immune to future infections. However, if you are infected subsequently with a different serotype, immunity wanes over time which increases the risk of developing Dengue Hemorrhagic Fever.

Travellers should take meticulous measures to prevent mosquito bites during the daytime.